The Case for Anthropology in Urban Planning and COVID-19 Resilience: Lessons from Buenos Aires

Six years ago architect Álvaro García Resta was the coordinator of Urban Innovation Projects for the Ministry of Economic Development in Buenos Aires, Argentina. At a meeting between community members and Guillermo Dietrich, then-Undersecretary of Transportation under then-President Mauricio Macri’s administration, one of the women in attendance began insisting that she needed traffic lights at the street corner near her house. Once the meeting ended, Dietrich asked García Resta to visit the corner and see if traffic lights could be installed. When he came to the intersection, something clicked for García Resta; he understood that while she needed traffic lights, the most important thing for that woman was to feel safe when she crossed the street. “Right then, I could see there are gaps between what people ask for, and their real desires,” he said.

Now Secretary of Urban Development for the city of Buenos Aires, García Resta has spent the past several years fusing the principles of anthropology with the discipline of architecture. An architect by training, García Resta began to think about how physical shapes and structures affected people’s lives and vice versa back in 2015, shortly after the traffic light moment. Anthropologically, he began to deconstruct the cultural representations of homes, trying to understand how people experience life differently in similar spaces. This led him to ask how public spaces could be designed to accommodate different residents and needs; ultimately, he knew this would have to be done by involving people in the urban development process. “Human behavior is to architecture what social dynamics is to urban design,” he said.

For García Resta, urban planning is “how we can set the conditions for the future in this important point of history, of technology and smart cities.” The ultimate goal for his Urban Anthropology team is improving the lives of porteños (residents of Buenos Aires), which includes — but is not limited to — architecture. “When I do anything with the community and ask what they’re having problems with, they never say IoT [Internet of Things],” said García Resta. “The Internet of Things is a tool, but the real problems are simple problems, like where can I run, where can I meet someone, where can I be secure in the public space, where can I go with my dog?”

García Resta wanted a way to ask residents what they wanted in a place and how they used spaces — he wanted to get to those human problems and find a way for architecture to serve these needs. As a mayoral advisor, García Resta approached current Mayor Horacio Rodríguez Larreta to see if he shared this viewpoint. He did, and García Resta became the undersecretary of projects in the Ministry of Urban Development and Transportation, a job he held from 2016 through the end of 2019. In this position, he set the goal of making a public policy out of this approach, so he created the General Directorate of Urban Anthropology to ask those questions, document the engagement process, and map out solutions with the community. For García Resta, it was important to create a sustainable relationship — “we always talk about having a mutual engagement” with the community.

Of course, while the current global pandemic has made the team’s work even more crucial, it has also made it more difficult. Previously, the Urban Anthropology team hosted residents at in-person planning meetings. Thanks to social media, Buenos Aires government networks, and advertising around the city, there were usually 200 people at these community engagement meetings. The team also attended other community or government-hosted meetings, including ones that Mayor Larreta hosted himself. García Resta paid close attention to the attendees of these meetings to make sure that they were representative of the diverse communities in Buenos Aires.

But on March 20th, Argentina entered a mandatory quarantine. The Urban Anthropology team quickly pivoted to physically-distant community engagement, soliciting questionnaires by telephone and online to understand the impacts of COVID-19 and the countrywide quarantine on the habits, sentiments, and social relationships of porteños. This ambitious study asked about everything from incidences of gender violence to feelings of loneliness to access to the internet to concerns about salary decreases after the quarantine.

They also checked on households’ ability to pay basic household expenses and created visual analyses that look at factors like how far people are from essential services, including food deserts and how far older adults are from pharmacies. The early results, released on April 2nd, were a compilation of data from 10,259 households in the city of Buenos Aires.

The majority of respondents identified as female and the average age was just over 45 years old. The Urban Anthropology team did find that wealthier neighborhoods had higher response rates, likely due to factors like internet access, stable addresses for mail, and more time to participate in the surveys. While the data is therefore not fully representative of the entire city population, the results are still valuable for the team, and the other government departments they work with.

For example, one question asked residents what current actions they will incorporate moving forward, even when mandatory physical isolation is over. The number one answer was “Online Processes,” with 71 percent of respondents saying they would continue to do processes over the internet; 64 percent said they would continue to use home banking apps. 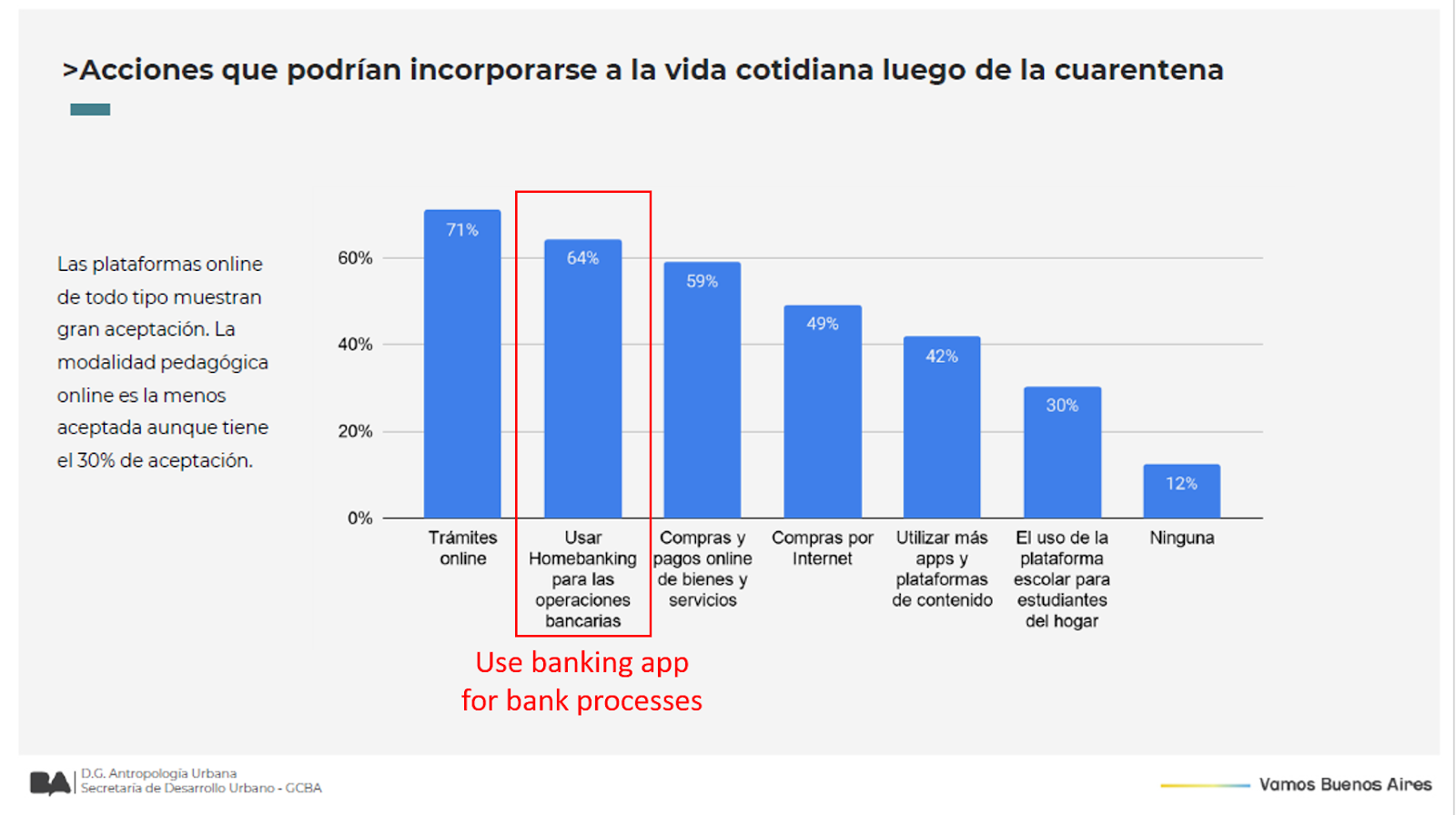 This trend towards online services has implications for the government, as there will likely be increased interest in digital government, and departments may need to experiment with new apps or portals for residents.

Another question asked about what in-person services were disrupted; 16 percent of respondents had interruptions in their medical treatment, and 9 percent had disruptions in psychological treatment. 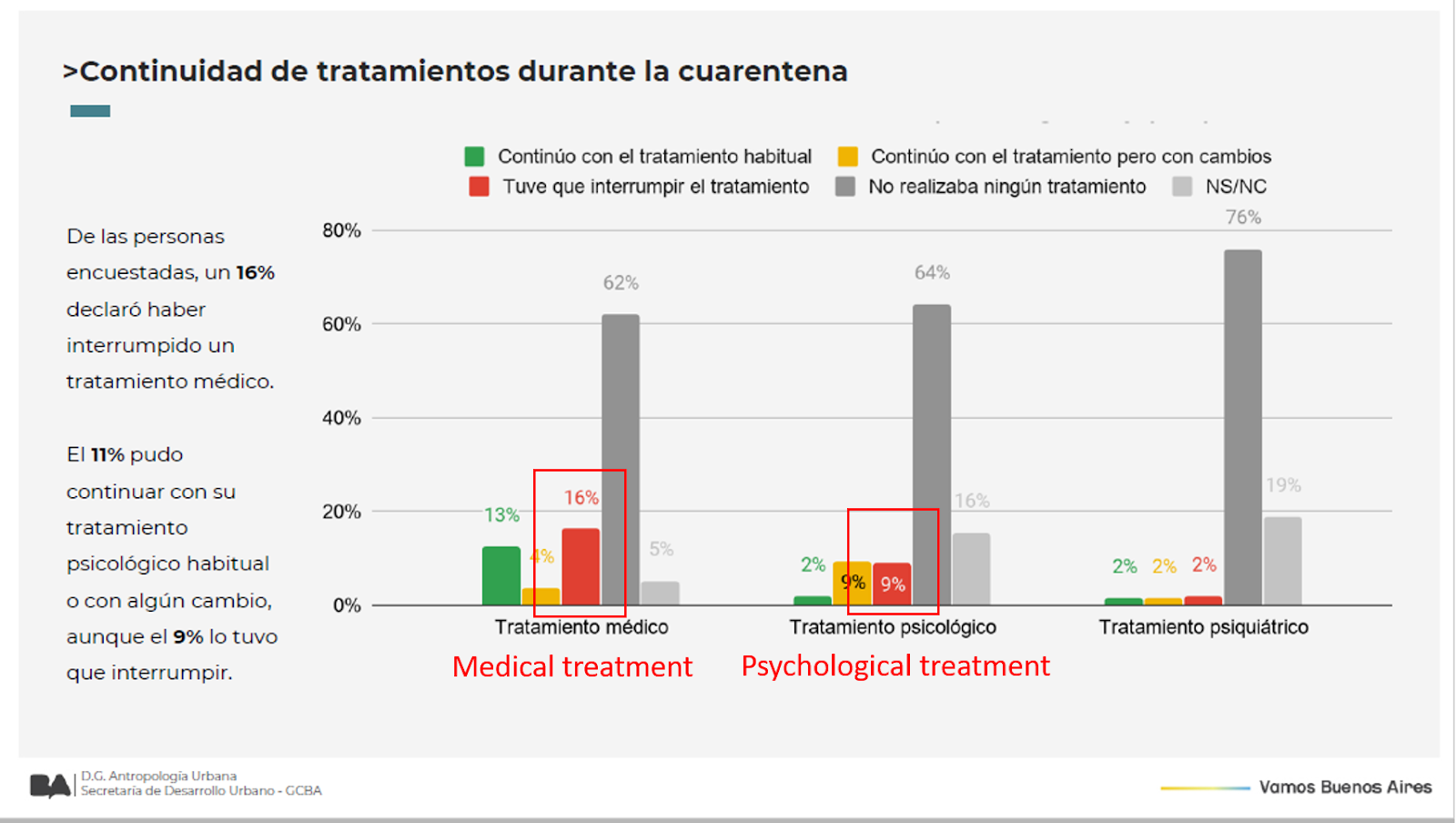 Although these figures are based on all respondents, not just those previously receiving treatment, this represented a large percentage of the individuals who were getting medical and psychological care before the quarantine. This could have implications for the future health and safety of porteños. It is important for the government to be aware of these disruptions so officials can explore ways to provide appropriate care where possible, and prepare for repercussions in the healthcare system post-quarantine.

Another question asked respondents to predict how their future daily behaviors will change thanks to this period of physical isolation. The Buenos Aires Underground, known as el Subte, is over 100 years old and was the first underground railway in Latin America. However, the Urban Anthropology survey indicates a significant drop-off in future ridership; nearly 50 percent of people said that they will avoid public transit even after the quarantine is lifted. This could be a major issue for the Ministry of Transportation, and will have significant impacts on the city’s traffic and urban spaces. 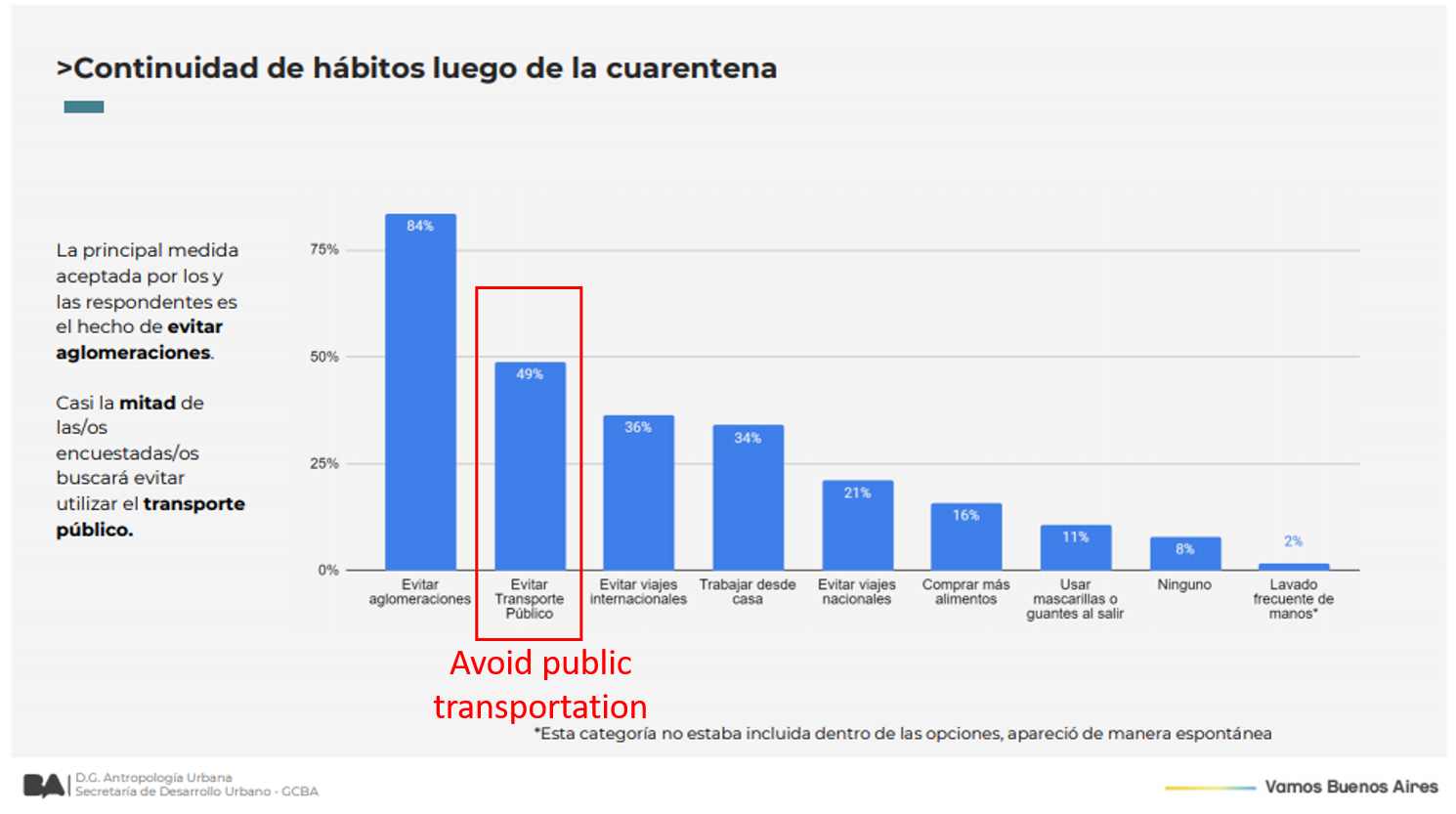 For García Resta, discovering these issues and communicating them to city departments is crucial. His team is uniquely positioned to be a go-between for the residents and the government, especially because of their attention to people’s sentiments and behaviors. García Resta is holding round table discussions with the heads of various departments to discuss the findings and develop innovative solutions. The Urban Anthropology team will continue to conduct surveys and physically-distant engagement, including research on youth sentiments during isolation and incidents of gender violence during the quarantine.

Other cities and architects can certainly benefit from the work and urban anthropology theories that García Resta is employing in Buenos Aires, both during the virus and pre-COVID-19. “I want to share the knowledge to make a contribution for somebody in innovation,” García Resta said. He would be happy to have other cities and urban design professionals mirror this urban anthropology work, and certainly residents would be happy to have their governments engage with the human side of city design.