With one day to go to the general election, local election offices and volunteers are hard at work preparing for, to put things lightly, one of the most turbulent election seasons in history. Between concerns about social distancing and the spread of COVID-19 at voting sites, a rapid increase in mail-in ballots, and concerns about civil unrest, local leaders responsible for coordinating elections have a tall task ahead of them. Many have been knees-deep in the trenches with early voting while simultaneously gearing up for the big dance on Election Day. In the midst of the chaos, local government leaders are turning to GIS tools to make voting more accessible, efficient, transparent, and safe.

The start of any successful election begins long before anyone casts a vote with voter registrations. In the past, elections officials have used hand-drawn precinct boundaries and spreadsheets to determine which voting district an individual or household belongs to. With congressional, state legislative, county, and local boundaries often crisscrossing, simple human error can result in the assignment of voters to the wrong voting districts, which can have deep consequences in close electoral races.

For example, there were two highly contentious state legislative races in Virginia in 2017. In one race, after the Republican beat their Democratic opponent by just 82 votes, an analysis of the voting district assignments found that 260 voters that should have voted in this particular race were improperly assigned to a different district. Another race was declared a tie, requiring election officials to pick the winner from a bowl. The Republican was declared the winner, maintaining the GOP’s lead in the House of Delegates. If the Democrat had won, the balance of power would have been split 50/50. It was later discovered that more than two dozen voters had been assigned to the wrong voting districts. In both instances, these improper district assignments could have potentially made the difference in the initial vote count and tipped the results of the race in another direction.

GIS could have enabled more precise voter location verification and district assignments. That is why several states are now using GIS to support these efforts. North Carolina uses GIS to conduct “spatial audits to compare their lists of voter addresses to geographic data.” Thanks to this technology, less than 1 percent of voter addresses are flagged by the system for further in-depth review. Wisconsin voters are assigned to districts directly through the state’s GIS system which goes so far as to place an individual voter in a district based on their physical location upon the land on which they reside. This is critical for ensuring proper district assignments on property lines that straddle multiple voting districts. Utah and Washington State both use GIS for redistricting, and their respective systems enable automatic voting district assignments to take place when district lines are redrawn.

In the face of the pandemic, local elections officials are working to balance the pressures of limited resources with the need to ensure voting is accessible to, and safe for, everyone. To make this possible, several states and counties are turning to GIS solutions.

California enacted several executive orders and bills to ensure all voters who want to submit their vote by mail have access to a solution other than the US Postal Service. Over the last several months, San Bernardino County election officials have worked to secure 70 exterior mail ballot drop box locations so voters could drop off their mail ballots. The county used GIS to determine where to best place the drop boxes based on eight different data layers:

Using these parameters, the county determined the most accessible and equitable locations to place the drop boxes and allowed the public to comment on those selections during a 10-day open comment period.

In Maricopa County, Arizona, election officials were ordered to consolidate voting locations for the state’s Democratic primaries in March 2020, cutting the total number of voting sites in half compared to the typical election. Taking into consideration concerns about enabling social distancing at the polls, and that facilities  such as senior centers are no longer viable during the pandemic, the county used GIS to optimize voting locations.

To do so, they analyzed in-person voting trends and population centers, and also gathered input from community groups. They also moved to a voting center model, enabling voters to cast their ballots at any of the county’s polling places. By considering a range of access challenges, including transportation, the county was able to make the voting location consolidation as equitable as possible.

Once the optimal locations for voting sites and ballot drop boxes are established, local election officials are also using GIS to assist residents in finding them.

Yolo County, California has released an interactive map (see below) that allows residents to identify one of the 12 Voter Assistance Centers or 12 Ballot Drop Boxes placed throughout the county that are located closest to them. Users can enter their address into the search box and can identify locations up to 25 miles from their location if necessary. Hudson County, New Jersey has also released a similar map.

Weld County, Colorado has released another voting locator map (see below) that categorizes voting locations by the three location types: Voter Service and Polling Centers, Voter Service and Ballot Drop-off locations, and 24-hour Ballot Drop-off sites. The map enables users to identify the closest drop box location and generate driving directions directly from the map. Users can also scroll through the list of voting sites and their respective operating hours.

Coordinating the deployment of staff, volunteers, and resources to different polling stations on Election Day can be a complex logistical operation. In many localities, election officials have traditionally used paper maps and other manual processes to assign staff to different polling stations and to coordinate the deployment of resources throughout the day. To make these processes more efficient, local elections officials have begun using GIS solutions.

In Kane County, Illinois, election officials have been using mobile apps and GIS resources to support election activities since 2019. First, the county uses GIS to assign IT staff to the county's 121 polling stations to ensure all technology and voting machines are operational before 6:00 am on election day. These assignments are based on proximity to the staff’s homes and the anticipated needs of the polling stations, among other factors. In the field, IT staff can report back to the county that all technology is functional and the polling station is ready to open through a mobile app.

Throughout the day, as technical issues arise at individual polling stations, IT staff are once again deployed based on the IT staff’s proximity to the site experiencing challenges, as well as the technical needs of the polling station. This helps the county’s IT staff respond faster to technical challenges, prioritize sites to respond to based on severity of the incident, and to minimize the costs of travel and other expenses associated with technical support during elections.

In King County, Washington, election officials are using a similar GIS solution when collecting from ballot drop boxes to ensure all boxes are collected, to monitor where field staff are throughout the day, to monitor the progress of collection activities, and to streamline reporting. Field staff have mobile apps that track their location as they collect ballots, and teams are responsible for reporting back to election officials after each pickup through a mobile survey tool. Election coordinators are able to watch these activities in real time through an operational dashboard (see below) and are able to respond to problems in real-time. 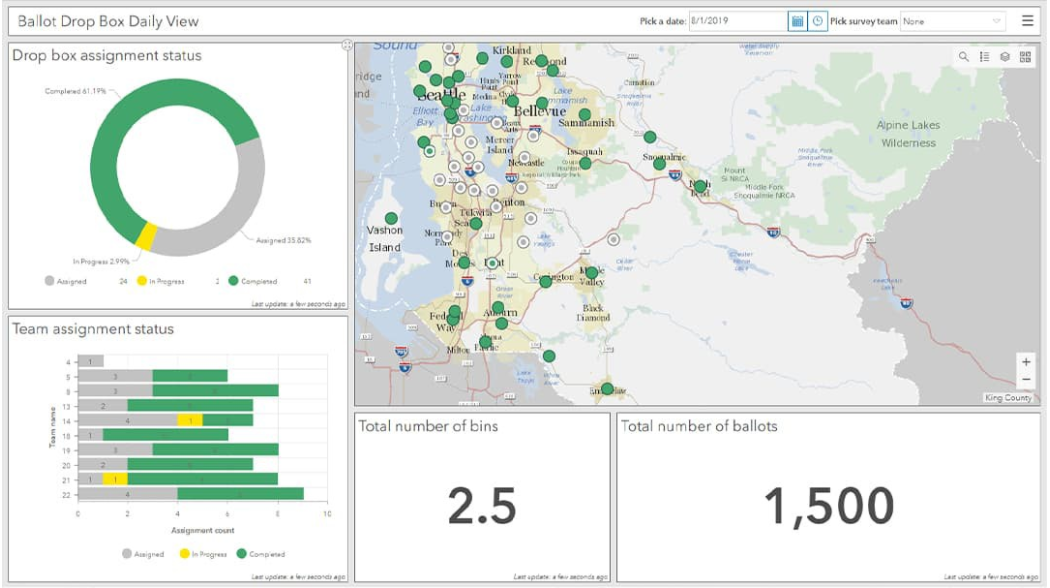 Election officials in Yolo County, California have a similar operation dashboard that monitors service requests at polling stations through the day (see below). Poll workers at voting sites can request assistance for a range of potential issues including IT challenges or ballot supply shortages through a mobile app. Election coordinators can deploy resources based on the proximity of election support staff or volunteers, and can prioritize salient service requests in a more efficient manner, ultimately speeding up response times and maximizing the use of scarce resources. Yolo County officials were able to free election staff up to focus on more important tasks, such as reporting election results in a more timely manner.

The county won a 2019 Clearie Award for Outstanding Innovations in Elections for building these capabilities. Next, elections officials hope to use historical voting data to identify neighborhoods with lower voter registration and turnout. With this information, they plan to target voter education and outreach efforts to those communities to increase participation. 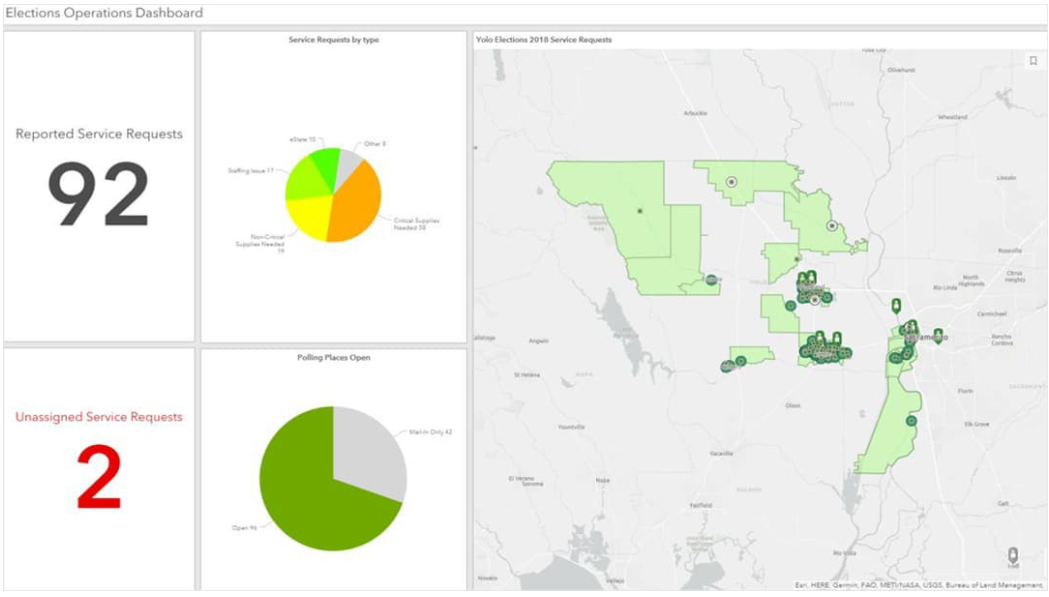 With social distancing in place and a reduction in the number of polling places available in some areas, many election officials are expecting longer wait times throughout early voting and on election day. GIS is helping several counties monitor these wait times for situational awareness and to help voters make informed decisions about when and where to cast their vote.

Elections officials in Hays County, Texas have posted a Wait Time Tracker (see below) that provides estimated wait times at polling stations throughout the county. The information on the dashboard is updated periodically throughout the day, allowing voters to find the locations with the shortest lines before leaving their homes, enabling them to save time and minimize their exposure to the virus. 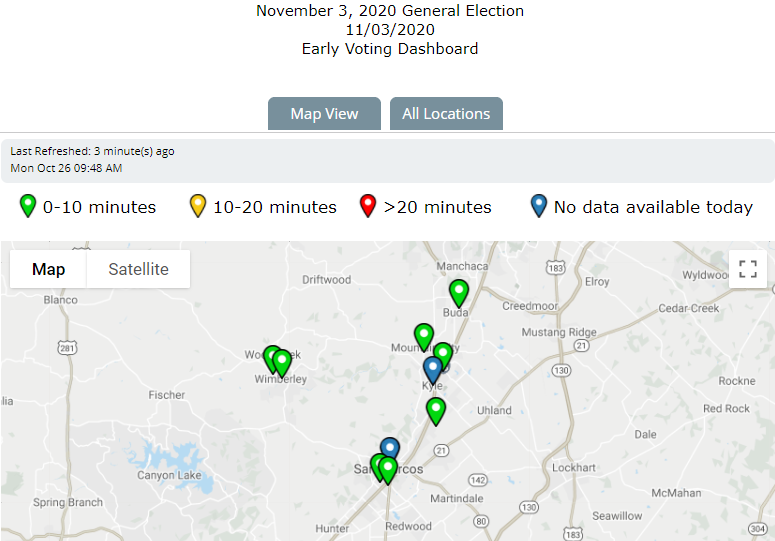 In the 2018 midterm elections, Collin County, Texas took a similar innovative approach which is proving itself to be very useful for the 2020 elections. Before the 2018 midterms, Collin County discovered that some polling stations were getting overwhelmed with voters and had extremely long wait times, while others were going largely unused. After conducting some research and discussing these issues with local voters, they discovered that a majority of people were effectively “using muscle memory” from past voting experiences to go vote, meaning they just went to the same place they went to before because it was the only location they knew.

To combat this, the county’s GIS team developed an app that allows users to see all polling stations and their subsequent estimated wait times near their address (see below). They took this one step further by listing each polling station and their respective distances from the user’s address. This allows voters to factor in how far they have to drive, walk, or ride public transit in order to find the location with the shortest wait times. In 2018, the application was viewed 90,000 times and generated 110,000 driving routes for users on election day, and the county saw its highest voter turnout in a midterm in its history. You can explore the interactive map here.

Conclusion: Making the Best of a Bad Situation with GIS

As evidenced by the examples above, local election leaders have been able to innovate in the face of the pandemic and make the best use of election resources thanks to GIS. Even before COVID-19, local governments were turning to GIS as a must-have resource for elections; the current conditions have only accelerated its use. With maps, local leaders are enabling more accessible, efficient, transparent, and safe elections across the United States during one of the most contentious election seasons in history.

If you are involved with an innovative election project using GIS, I would love to hear from you. Please email me directly at matthew_leger@hks.harvard.edu.

A Shining Moment for GIS: Responding to COVID-19 with Maps